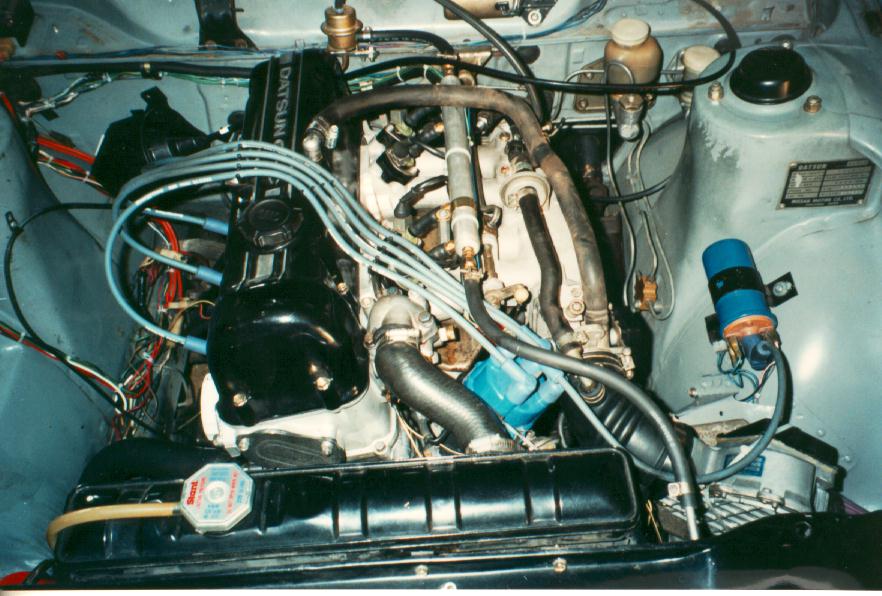 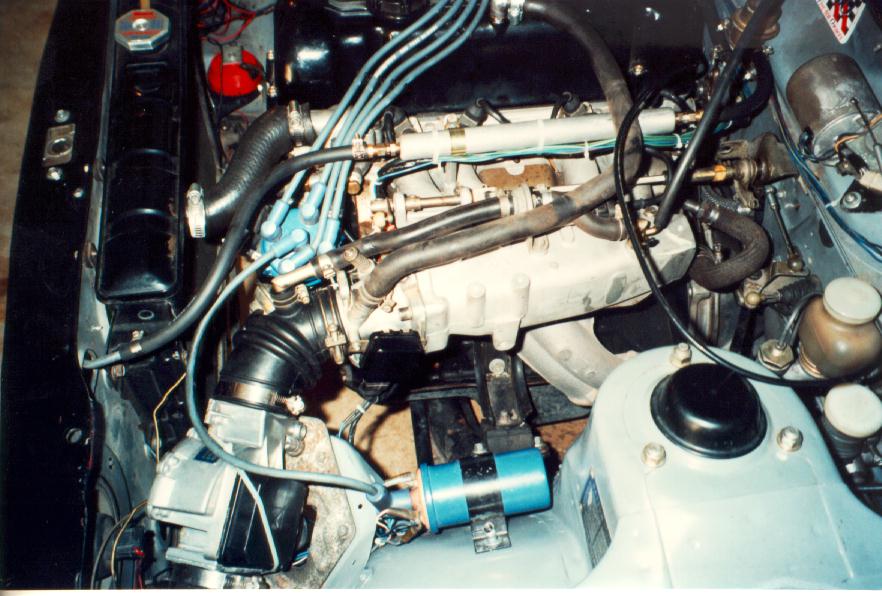 The manifold is from an imported Japanese L18. All the electronics are 1980 200SX (no O2 sensor) and the throttle body and most of the linkage is 1979 280ZX (thanks to Cary for parking his parts car at my house :^)

Headwork is minor. Still using a head the Broos flowed for me in ’93. L18SSS. I had the intake valves modified by cutting 1mm off the face, leaving a 1mm x 1mm lip all the way around. “Rimflow” is the common term. It’s supposed to help with reversion. I also had to drill two 10mm holes between the stock upper mounting holes for the new manifold to bolt to the head. The injectors are pretty much where the stock holes are. That and a notch in each port for the injector nose. That about it on the head except for modifying a manifold gasket.

Used the L18 manifold. This came off a Japanese home market motor. I think you could cut down a Z manifold and reweld it, but this was easier. The L18 injectors were still in it but were pretty frozen. I used the 200SX injectors which came off a LZ20. They proved to be about the right size for my L20B bottom end. The L18 fuel rail was there, but ugly, so I did an aluminum tube fuel rail/fuel plenum. Big aluminum tube with brass fittings leading to the injectors and fuel inlet and outlet.

Mounted the 200SX fuel pump and attendant hardware under the car behind the rear seat footwell. Almost like it was made to go there. Doesn’t make a sound when running, either.

Robbed the 280ZX of various brackets and fittings (Cary SAID he only wanted the motor, trans and FI) I used the 280 brackets for the 200SX air flow meter, (same part as the 280ZX but with different spring tension on the intake flap) including carving the part that’s mounted to the ZX inner fender to mount to MY innner fender. I didn’t build a single bracket for this conversion.

So far, so good. Now for all the wiring.

AND, the EFI on a 200SX is on the wrong side. So all the wiring was either too long or too short. You’d better know how to solder before taking on a project like this.

I ended up with auxiliary fuse block (’68 Dime) mounted to the bottom of the glove box. Various fuses and fusible links from there. The “new” harness isn’t re-wrapped yet, but is routed where it’s supposed to go.

All in all, the installation looks pretty OEM. Except for the fuel rail. And it works great. I’ve had to play with the throttle linkage a bit (shortened 280ZX) and it’s finally perfect. Even the wife likes it. (she’s my “OEM” barometer).

I was running 38mm SUs for the last 6-8 months. I’d replaced a set of Z SUs with these and found the bottom end torque to be vastly improved. But I lost top end, obviously. Well, the bottom end is better than ever and it pulls better at the top end, too.

From the time I pulled the head to the time I turned the key was about 16 days. Three LONG weekends and about 3-4 hours a night on the weekdays. I could obviously do it faster now, but where to route wires AND get it right the first time takes a ridiculous amount of time. Not to mention the tweaking done for a couple weeks afterwards. Moneywise, I’ve only got about $300-400 into it. Junkyard parts and headwork. Time?

How fast do you wanna spend?

One thought on “Adding EFI to the Datsun L20B”