It looks like consumers in California will soon be seeing electric Mini’s on the street. The Mini’s are made in Oxford, England. These examples will be partially assembled alongside the normal cars, minus the engine, gearbox and fuel tank. Then they’ll go over to parent company BMW’s facility in Munich, Germany, to be fitted with all the necessary electric drivetrain components and batteries before heading west.

BMW sources told Automotive News Europe that 490 of the Minis will be leased to selected customers in California and 10 will be used as show cars.

The electric cars will have yellow roofs, and will allow BMW to meet California’s requirement that carmakers start selling zero-emission vehicles. 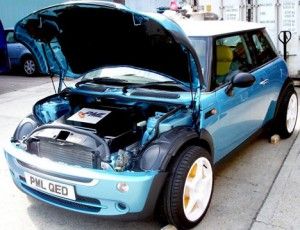 Too bad that they are not bring the bad-ass PML Mini QED. Those blokes created a Monster electric Mini that features four 160HP electric motors, one on each wheel.  The car has been designed to run for four hours of combined urban/extra urban driving, powered only by a battery and bank of ultra capacitors.  A claimed top speed of 150 mph, a 0-60 mph time of 4.5 seconds, and a reported range of 932 miles when the ICE hybrid gas motor provides additional charge for the on-board batteries.  In this hybrid mode, fuel economies of up to 80mpg can be achieved.

3 thoughts on “BMW – Mini to Produce Electric Cars in California”